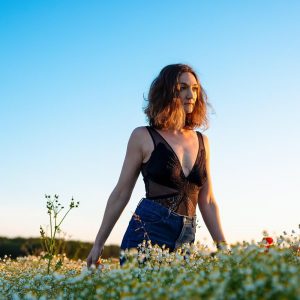 She’s the Frenchiest of Americans. With family
ties on both sides of the Atlantic, Emma Doo
exudes American can-do energy and casual French
elegance. She came to the world as Emma
Flornoy, the daughter of a Gregorian chant
vocalist, and began studying singing at age 15.
Her artistic journey was filled with musical
discoveries. « I remember crying myself to sleep,
listening to Elvis Presley and Ben Harper… ».
During the previous decade, Emma Doo developed her
songwriting techniques with the bands Fudge
(formerly known as Oazzunk, Acid funk) and Wine
(neo-soul/hip-hop) which took her to notable
Parisian jazz-funk stages such as Musik’elles, Voulstock, Solidays, China, New Morning, and File 7.

« I spent time in other people’s heads and wrote a lot for other vocalists
before I was able to truly connect with my own
thoughts and write honestlyrics for myself », she
says.

In 2015, Emma moved to Boston to continue her
musical journey at Berklee College of Music, where
she learned how to write music, developed further
her lyric writing skills and most importantly, gained enoughconfidence to lead her own project.

« You’d think after 10 years of experience that I would trust every decision I make and always know what I want, where I wanna go, but I’m not that person.
Sometimes I go right, and think… wait, should I
be going left?! What I understood with time and
help is that what matters most is writing with
what you have and with who you are. As an artist,
that’s all you can do really, the closest to perfection you’ll get is authenticity. »

She’s now preparing her debut album produced by
Arthur Caget (NuTone).
It offers a taste of smooth soul and urban pop,
reminiscent of a bill packed with world-class
artists such as Jessie Ware, Julia Michaels, and
Alice Russell.

However, it smolders with Emma’s
uniquely tender yet tough delivery, influenced by
jazz greats Sarah Vaughan and Ella Fitzgerald
and pop voices such as Cat Power. Her vocals have
been described as « a rough touch with a tender kiss. »
Spontaneity and subtlety cannot dim or disguise
the crazy energy that flows from her on stage and
in life.